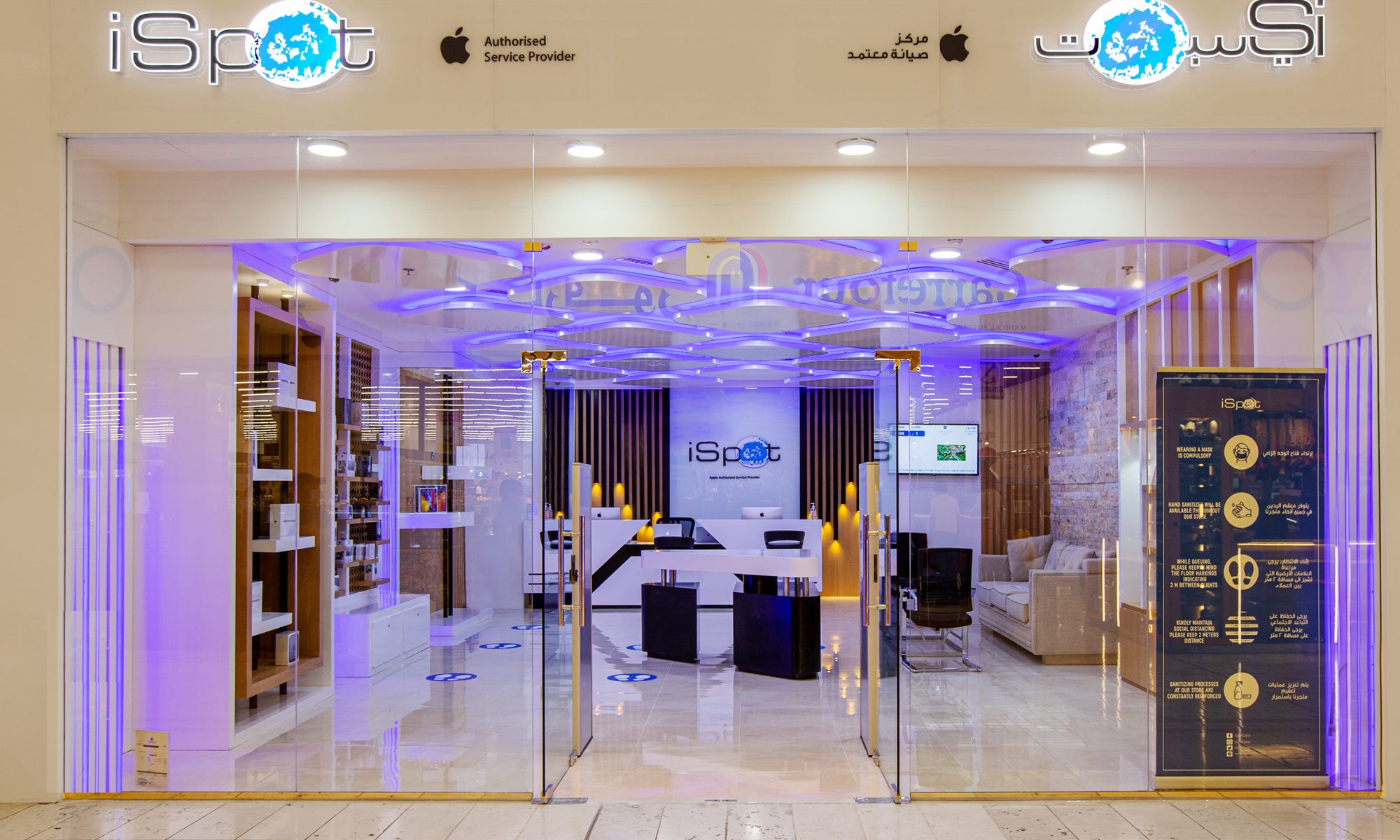 Much to the delight of Apple product loyalists, Ali Bin Ali (ABA) Holding opened the second iSpot Service Center in Qatar at the popular Villaggio Mall. The Apple Authorized Service Provider opened its doors to the public on Friday, 19th February, 2021.

Strategically located right opposite Carrefour hypermarket, the new iSpot Service Center offers Mac’s signature service and warranty repairs on all product categories by a trained team of Apple-certified technicians, as well as the entire suite of Apple products.

To celebrate the launch of the new store, iSpot has announced a full week of free complete health checkup for all Apple products, starting from Friday, 26th February, 2021 until Thursday, 4th March, 2021.

Speaking about the opening, General Manager of Prime Distribution and Trading Company – a subsidiary of ABA Holding – Mr. Mohammad Imran said: “We are excited to open our new Service Center and serve the people of Qatar better. At iSpot, all the repairs are done 100% as per Apple standards and we aim for 100% customer satisfaction. Our all technicians are Apple-certified and look forward to serving all Apple product users.”

Continuing with its mission to bring the latest technology to Qatar, Dohatna Innovative Distribution, in association with Samsung Gulf Electronics, has announced the launch of the new Galaxy A80 in Qatar.

Built for the ‘Era of Live’, the Galaxy A80 offers meaningful innovations on a safe and secure platform: Samsung’s first rotating triple camera and the immersive New Infinity Display.

The new model was inaugurated at an event on July 11, 2019, in the presence of Mr. Mohammad Imran, General Manager of Dohatna Innovative Distribution and the Samsung team.

Excited about the new model, General Manager of Dohatna Innovative Distribution Mr. Mohammad Imran said: “Dohatna Innovative Distribution is way ahead and committed to bringing the latest technology and solutions for our clients. We always look forward to launching a new Samsung mobile phone model in Qatar. Every new phone the brand launches is always full of innovation and potential, and it is our pleasure to be associated with it. I am happy to launch, in association with Samsung, the Galaxy A80 in Qatar.”

With Galaxy A80’s Intelligent Performance Enhancer, you can expect your Galaxy A80 to work harder, faster and longer whenever you need it. Its AI-powered performance optimization software maximizes the device’s CPU, RAM and battery capacity, tailoring your Galaxy A80’s efficiency to your everyday needs.

True to the slogan, ‘Growing together to reach new heights’, ABATS has grown and evolved in its journey with the successful implementation of the FORWARD ERP Application.

The added value that FORWARD will bring about in ABATS involves the introduction of the Project Costing & Billing module. With the help of this module, the division will be able to perform costing and billing operations more efficiently by having an overview of all its projects and activities. This will be a key milestone, and will enhance the core business of ABATS.

On Sunday, a gathering was organized to celebrate the successful launch of FORWARD at ABATS. Apart from the ABATS team, present at the event was Chief Operating Officer-ICT Mr. Mohamad A. Ebrik, ABA Group PMO Manager Mr. Youssef Farajallah Mahmoud and Intrasoft Project Manager Mr. Amer Dakhqan. Top management from the Head Office also attended the event to mark their support for the FORWARD Project.

Congratulating Team ABATS on its achievement, Mr. Ebrik said: “Whenever there is a new system implemented there are hiccups, we face troubles in business but slowly we start to realize its benefit and start utilizing it. Similarly, with FORWARD we are bringing the latest technology to ABA and investing a lot. But the biggest investment we are making is in our people who are running the application. Now, the challenge is to make sure that we can utilize the FORWARD system and take advantage of it.”

Mr. Ebrik also added: “The team has put in great efforts, spending weekends and nights to make sure that everything was up and running before the scheduled Go Live.”

Mr. Youssef and Mr. Amer also thanked the ABATS team for their dedication and cooperation throughout the transition period.

While the achievement was a result of substantial efforts of the whole ABTAS team, two heroes stood out during the transitional phase, namely Mr. Shafquat Zubair, Finance Manager, and Mr. Shaleh MD. Mridha, Management Accountant.

Certificates of appreciation were handed over to them by Mr. Ebrik. Mr. Zubair accepted the certificate on behalf of the entire ABATS team and said the actual journey has begun now with the Go Live.

To mark the journey to new heights, ABATS & FORWARD team members put a small note on the symbolic tree to mark their contribution to the ABA FORWARD project. It was also a sign of unity and cooperation, which is the basis for the success of the project.

The FORWARD planning and transition phase for ABATS was made possible by the sheer dedication and commitment of the ABATS team complimented by excellent guidance and teamwork by our PMO team.

Lined up next for the roll-out is ABA Logistics Division. FORWARD PMO and the Logistics team are putting in every effort to Go Live, as scheduled, in a few weeks’ time.